After 48 years of frustration and agonizing defeats, I sat and watched for what I swore to myself would be the last time, as my Minnesota Vikings were seconds away from yet another heartbreaking lossâ€¦.

There are few great playoff come from behind wins in the NFL. The Minnesota Vikings, MY ( I feel I have the right to stake claim to a small part after this long) Minnesota Vikings, have no such victories during their many playoff appearances. But as of this past Sunday, all the old excruciating losses can now be put in the rear view mirror, because we finally broke the curse. 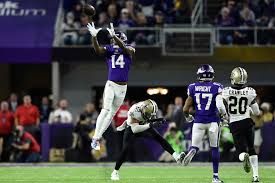 In a span of ten seconds, my thoughts of leaving behind my Purple Passion for this team vanished almost as quickly as the thought set place in my mind. In those ten seconds, what will forever be called the Minnesota Miracle, made me and millions of fans remember just why we bleed Purple and Gold.

I remember just one other time in my life, when such an event took place and I had similar thoughts of walking away from my favorite baseball team. Down to one strike and a World Series on the line, the New York Mets drew another breath, when all seemed impossible and a series loss looked inevitable. Then too did I swear I would never again put myself through a season of joy only to sit in despair when my team went through one more ugly loss when it mattered most. But just like this past weekend, they pulled it out in â€œAmazinâ€ fashion and made me a believer once more.

I have been a Viking fan since my dad told me they were called the Purple People Eaters way back in January of 1970, when they appeared in their first of four Super Bowls. Since that memorable first impression I have watched (although almost impossibly back then without streaming) as many games as I could. I listen now to Minnesota sports talk radio on a regular basis ( thanks you IHeartradio) and canâ€™t help but enjoy the always entertaining Paul Allen, who does the Viking broadcasts and like so many of us, is a diehardÂ  rube.

Over the years I have watched some great Viking teams and dozens of Hall of Fame players perform at a high level and set seasonal records but never get that Super Bowl title. There are three very bad losses we sat and watched in the NFC championship round, all of which we were favored to win. This week we finally got one back from the New Orleans Saints who robbed us of a Super Bowl visit back in 2009, when Brett Favre threw up an interception that cost us the game.

This week like last, weâ€™ll be favored to beat the Philadelphia Eagles but like most Viking fans , we donâ€™t believe any game will ever be easy or sure thing. So Iâ€™ll sit back in my chair one more time, stress over the chances we wonâ€™t have something crazy go against us, and for those last few seconds of the game, pray we finish off the birds. No more drama and last minute Hail Mary passes (which phrase was coined after a loss by us to Dallas in 1975) but maybe a good old fashioned hard played win to get us into a home game Super Bowl. That in itself would help erase years of frustration..GO VIKES!!!